In the past, this was a major roadblock to many of my favorite activities. I had trouble on some hikes in the mountains as they passed too close to cliffs. I passed on air travel because, well, being suspended several miles in the air in a tin can made me uncomfortable.

As I grew older, though, I made the decision that fear would not dictate my life. The first way I tried conquering my fear of heights: rock climbing.

In high school, I had the opportunity to go on a climbing trip at Smith Rocks in central Oregon. As with any other time I've been up high, it scared me to death. Rather than run from the fear, though, I embraced the sudden onset of adrenaline it caused and kept pushing forward. Despite my terror, nothing beats standing on a precipice hundreds of feet from the ground looking over a canyon.

I started mountain climbing when I was out of college for many of the same reasons. It's strenuous work, intensely scary, and completely worth the payoff when you reach the summit and unrestricted 360-degree views of the world below.

This past weekend, I had the chance to go hiking with some of my best friends. We hiked through Lava Canyon on Mount Saint Helens - not a mountain climbing trip, but also not a trip devoid of heights either. 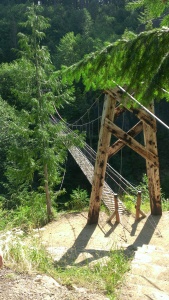 The trail features a 125-foot suspension bridge dangling over a rapidly-moving river shooting through the aptly-named canyon formed from a 2,500 year old lava flow. It's quite high above the gorge, and presents an absolutely beautiful view of the canyon. The springy effect of the bridge, though, is enough to make anyone slow down and think twice about the hike.

Below the bridge, the trail winds along narrow, unprotected cliffs with sheer drops down to the lava-paved canyon below. A few more gravelly sections made us slow down quite a bit on the return trip - if anyone were to fall, there would be no recovery without ropes and climbing gear. One section of the trail crossed a tiny runoff-powered waterfall - again, a narrow section with a sheer drop. Thankfully, the Forest Service had anchored a cable to the wall to provide support, otherwise this part of the trail would have proven perilous indeed.[ref]I think all of us slipped either on the way down or the way back up. Without the cable, that could've been really bad.[/ref]

It also paid dividends in the end.

After dropping down a 30-foot ladder into the canyon, you're provided the opportunity to climb "The Ship" just a little farther down the trail. It's an island of lava in what used to be a much more active channel, featuring trees on its crest that "appear to be masts rising from a ship of rock." 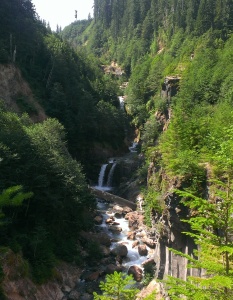 The Ship presents an excellent view of the lower part of the canyon, showing off not one but several gorgeous waterfalls in the process.

When presented with opportunities that might otherwise instill fear, we run away more often than not. Our "flight" instinct is well-developed, and it's often far safer to just avoid risk and danger than to face it head one.

But we should also be asking ourselves how much of this fear is grounded in reality. I avoid heights because they scare me - but at the same time the fear excites me and pushes me forward. Heights have not proven unconquerable to me thus far, so is my fear of them really justified?

A negative experience with a startup earlier in my career has kept me away from involvement with other startups, many of which have been wildly successful later. Part of me is afraid of losing my investment again - but is that really a justified fear, or just my way of justifying the fact that I don't want to put in the work on what might not be a sure thing?

The one sure thing, though, is that frequently challenging the things that scare you will give you an adrenaline rush. If you enjoy that sort of thing, you'll keep trucking along. If adrenaline itself gives you pause, don't put yourself in an uncomfortable situation.

Bottom line: don't shy away from the things that scare you just because it's safe to avoid them. If others have made it thought, you might just, too. And you'll come through that surge of fear-facing adrenaline with great stories, life lessons, and more courage to face the next challenge.