I don't often take vacations. Our industry moves quickly enough such that taking even a day off makes me feel like I'm missing massive changes and losing momentum with client projects.

Still, there has to be some way to avoid burnout after all of the hours we put in.

So this past week, I took my first vacation in over a year. My wife and I packed things up and hit the airport for a week of relaxation and recovery.

Part of the trip involved a several-hour drive across states for a short hiking trip. Since we were quite a ways away from home, I rented a car.

I knew in advance that rental cars can be finicky.[ref]The last few rental arrangements I made were bumpy because the companies ran out of vehicles. Since we were arriving late at night, I didn't want to risk that yet again.[/ref] I opted to set up a non-refundable reservation to guarantee my car would be there when I arrived. Marking a reservation as non-refundable is always a bit nerve-wracking, but I knew we'd be there and that we'd need a car, so I took the risk.

When we got to the airport, though, they were still out of cars.

"I don't know what to tell you. We're sold out. There's a line over there waiting for when we do have cars, but it'll be at least 2 hours before we get any vehicles for anyone. You can wait in that line and maybe we'll have something.

"It's midnight. Are you serious?"

"Well, you could take a cab and just come back later tomorrow."

"Will you have cars then?"

"Probably not, but that's the best I can do. Only other option is to cancel and go somewhere else."

"My reservation is non-refundable. You gave me a guarantee ..."

"Sorry about that. Nothing I can do."

We were tired, away from home, and without transportation. I decided to go to another company (who matched our rental fees) and risk calling for a refund in the morning.[ref]We'll be getting a refund on our non-refundable trip, by the way. When the service counter actually recommends you go to a different company, they waive their part of the contract entirely.[/ref] 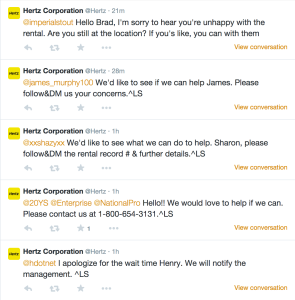 Hertz tweets apologies to frustrated customers more than they do ads, deals, or satisfied-customer stories.[/caption]

Like many other times I choose a service provider, I selected Hertz based on their reputation. Everyone I've spoken to has always praised their customer service. Free upgrades to compensate for long wait times, responsive customer support representatives. Fair prices.

When I made the reservation, it felt like the right thing to do.

My experience with Hertz, on the other hand, was horrendous. I turned to Twitter to vent my frustration, and was told the next day I could email for possible reimbursement. This is helpful, but does nothing to fix a botched rental agreement while I'm trying to talk to unhelpful counter representatives at 12 in the morning.

Standing in line with 30 other people.

Who all had "confirmed" reservations.

Including the customers at the "premium" Gold Counter.

I also noticed, through Twitter, that Hertz seems to be apologizing more frequently than pleasing. It appears that botches reservations aren't incidents isolated to one day or one airport, but they're either fast becoming or already established as the norm for doing business.

It's an incredible failure in business when your customer service desk is reduced instead to customer support and spends more time apologizing for problems they a) didn't cause and b) are seemingly powerless to fix than actually helping customers.

I likely won't ever be renting from Hertz again.[ref]Though the amazing support from E-Z Rent-a-Car, a company I'd never even heard of before, was enough I might go back there again instead.[/ref]