One of the most constant and frequent killers of forward progress is the word "someday."

These are admirable goals, but they aren't actionable ones. Using "someday" as a measurement gives you the ability to sit back and never really make progress on that objective.

If the marathon is always scheduled for "someday," you can wait to start training until tomorrow. If your business license will be in the mail "someday," you can still play Halo after work instead of working on sales proposals.  If that glorious book deal will come "someday," you can put off NaNoWriMo or whatever other writing challenge you hope will kickstart your career another year.

More often than not, "someday" is the shield we raise to protect ourselves from our own fear. Our fear of failure, our fear of change, sometimes our fear of success and what that means when compared to past achievements and failures.

Personally, I've always fallen on the "fear of failure" side.

I bragged in elementary school how I liked to run because it was fun. I ran in the schoolyard before class. I ran after school with friends. I ran on weekends rather than watch TV. I loved it! I also bragged how, one day, I would run a marathon.

Everyone laughed at me.

I really did enjoy running, but I was never an endurance runner; just finishing the mile for fitness tests in middle school was a burden (and I never did so fast enough to get an A in gym). In high school, I wasn't the most fit runner on the track team, either.[ref]Though I did actually beat other runners in the 100-meter sprint![/ref] Constant statements that, "someday I'll run a marathon" were met with eye rolls and mocking.

One day, after college, a friend tired of hearing my empty promises of "someday" challenged me: "Why not today?"

Hurt by their challenge, I deflected as best as I could. But the truth was, I was scared. Scared to try - what if I failed and proved all of the you're-not-a-runner naysayers right? Scared to change - setting aside the time required to train for a marathon would seriously derail my freelancing attempts and wreak havoc on my schedule. Scared to succeed - a marathon had always been the entirety of my bucket list; what would I work on next?

I wrestled with questions for a few weeks. Then I went out and bought a pair of running shoes. Thanks to a free training calendar I found on an old Nike website, I started forcing myself to train. First goal - run to the end of the street without stopping. Then run a 5K. Then a 10K. Then a half marathon.

I signed up for my first competitive marathon later that year - and completed it. 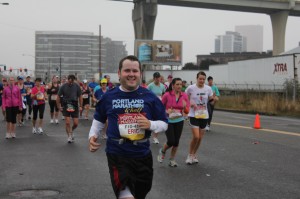 Just shy of the mid-point of my first full marathon. It was a lot of work, but I smiled all the way to the finish![/caption]

Since then, I've completed a total of 3 full marathons, several half marathons, and countless smaller competitive races. I'm not the first person across the finish line, but the important thing is that I finish.

Not someday, but on a specific day of my choosing.

Cowardice is the driver to applying "someday" as the measurement of our goals, our success, and our hopes. If you can only hope in "someday," though, your hope is a fantasy.

Stop giving in to fear and set a way to measure the progress towards your objective. If you fail, good! At least you actually tried to reach it.