I quit my job in 2009. There were just too many things going on with the company that bothered me on an ethical level for me to consider staying the course. I submitted my resignation in early November and, by the end of the month, was back to the drawing board looking for work.

I'd been at a startup, taking a tiny salary of $1000/month just so I could afford gas for the commute and the minimum payments on my student loans and credit cards.[ref]The rest of my salary was in stock and options. I didn't realize when agreeing to the split that stock counted as cash for tax purposes, so on paper I actually owed more in taxes than I made in cash by the end of the year. If not for help from family, I'd still be under water with that deal.[/ref] Not much, but just enough to get by. Unfortunately it also watered down my perception of what my time was worth.

Come December, and I was once again on the downward spiral of borrowing money to pay existing debt. I borrowed from family to keep my lenders happy. I maxed out credit cards paying for gas and related expenses so I could continue to hunt for a job. Once, because my tank was empty, I hiked 4 miles to apply for a job at a movie theater only to be told I had to apply through their website to the corporate office.

It was rough, so I tried freelancing. I started with what I thought were reasonable rates of $25/hr for custom development work.[ref]Note, if you think this is acceptable, you're wrong. If you're charging this or less, raise your rates now![/ref] I was able to land a handful of jobs, but the split of unbillable to billable time (i.e. sales versus development) meant I was only making $7/hr for my work. Factor in taxes and this is nowhere near a livable wage.

Factor in the fact that I was competing with outsourced firms that started their bid at $10/hr for the same work, and I was in trouble. Several people told me my rates were too high and I compromised just to win the bid.[ref]I once delivered a fixed bid of $600 for a project that took me three weeks of full-time development plus a week with a subcontractor. After I paid my sub ($350) that left me earning $2/hr for my work. Completely unacceptable.[/ref]

I finally sucked it up, buried my pride, and visited the state employment office. They introduced me to a company looking for both a web developer and a marketing manager. I could do both, and applied hoping I'd land the job easily.

I did, and it was probably the worst job I'd ever had.

I was paid an entry-level salary for my work. It was still far more than I was earning with my pittance of a freelancer rate, but in hindsight it was far too low for the responsibilities tied to my position. I accepted figuring I could impress management and move up through the company quickly.

Most of the team showed up between 5 and 6 am every day. This wasn't because we wanted to be to work early, it was because our boss didn't show up until 11 or 12 and we wanted to get as much work done before he arrived as possible.

It also meant we only had to put up with him for a few hours each day.

He usually started his day by locking himself in his office for an hour so he could read the news. Then he'd come by each cubicle and office and tell the staff how little they actually deserved what salary he was paying them. Occasionally, he'd call us in to the office to berate us in person.

Once, while researching Meaningful Use criteria (this was a medical software company) I stumbled upon a detailed editorial on Forbes. My boss was walking through the office, noticed I was reading the article (part of my job coordinating system requirements) rather than writing code, then called both me and our project manager into his office. He yelled and cursed at me for a half hour, explaining how I was scum, didn't deserve to work for him, was wasting his money and company resources, and should be fired on the spot.

My saving grace was our PM who backed me up entirely and explained later, "he's just like that. Don't worry. You're a good engineer."

When I took my next job, I was blessed to have a kind hiring manager. He looked at my salary, laughed, and said, "you're worth way more than this. To start, let's just double your salary. It's still not what you're worth, but we'll get there in steps."

Unfortunately, being paid peanuts at a start up, being told my costs are too high, and being yelled at for being "a worthless waste of space" for so long has me constantly questioning my value in every position. I still don't know exactly what my time is worth, as I only have past experience on which to base my valuation.

What I do know, though, is that forward momentum sometimes requires you leave behind what you know. In hindsight, I realize there are baggers at Safeway who make more than I made at that medical software company. I know also that my early freelance clients were getting a substantial bargain for my time.

I also know you only have one chance to make a first impression. Said another way, "you're only ever hired once." After that point, any raises you get are incremental and based somewhat on where you started.

Having a manager double a current employee's salary is almost unheard of, but that's frankly what many in our industry need to happen.

When I look at rough tabulations of what interns make at some companies, it calls into question once again how I value my own skills: 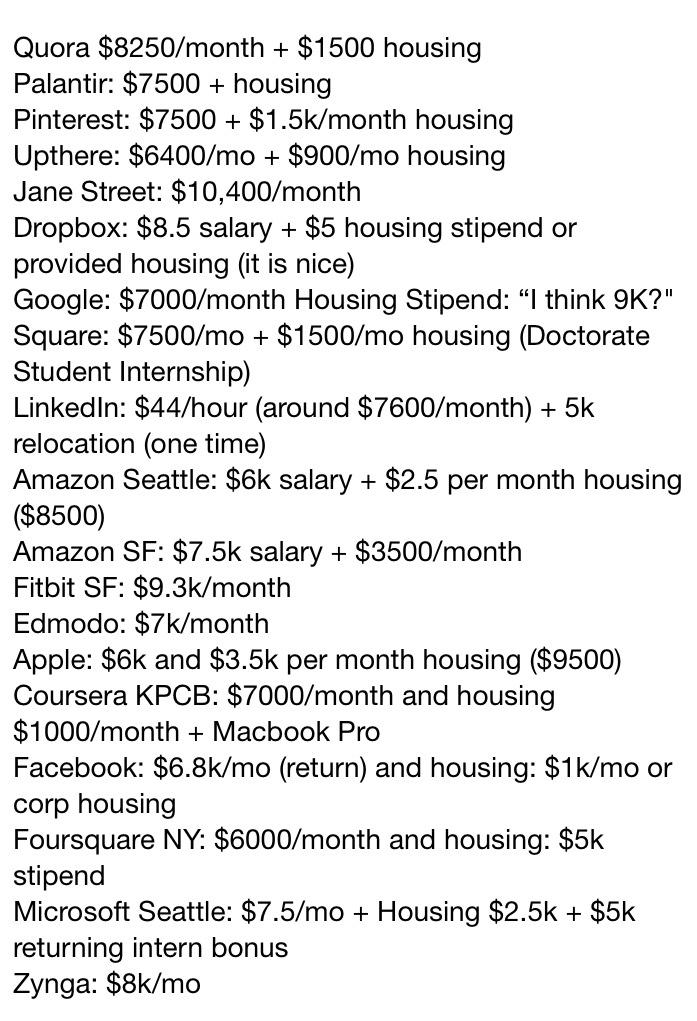 Friend made a list of top internship offers via @thzonhh[/caption]

I have had some toxic managers making laughably poor valuations of my talent in the past that, in turn, corrupt my perception of what I'm worth today. As a result, I likely settle for less than I should today.