I know, a political article during election season.  Sue me.

In this year's Oregon election, we're being asked to vote on two somewhat controversial ballot measures - 82 and 83.  Measure 82 will amend the Oregon constitution to allow casinos to be built elsewhere than on tribal land (we already have 9 tribal casinos in the state).  Measure 83 will approve a specific casino - currently called "The Grange" - to be opened in Wood Village near the river.

I think it's interesting whenever two ballot measures are tied together - even if a majority of voters approve 83, it's a moot point if 82 fails.  Likewise if 82 passes, nothing substantive will change this election season unless 83 also passes (while 82 will permit casinos, they must still be individually approved by voters. Hence the two-ballot system). 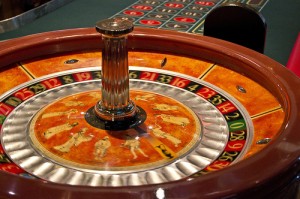 Photo by Matthew Powell via Flickr.[/caption]

Of those 19 total statements of opposition, 16 of them were submitted by the same organization.  The "It's Still a Bad Idea Committee" opposes the bill so strongly that they placed out not one, not two, but sixteen statements against the measures in the Oregon voter's pamphlet.

A bit more research and you can even figure out the driving forces behind this oddly-named political action committee.

My first Google search turned up a claim by followthemoney.org that all their funding had been furnished by the Confederated Tribes of the Grande Ronde.  I did a bit more research and looked through some official sources (namely, the Oregon Secretary of State's Elections Division) and found a better figure.

It seems the organization's $1.5 million in cash contributions has come from:

In addition, they've had $84k in in-kind contributions from:

I will not say whether I am for or against these bills.  However, I will suggest that, before you make a decision one way or the other, to listen to both sides of the argument.  Just be sure to do your homework so you know where those arguments are coming from.  In the case of Oregon measures 82 & 83, there seem to be several voices in favor of the bills and one - albeit large and well-funded - voice against it.

As the election draws near, are you taking time to consider the choices placed in front of you and make a conscious, reasoned decision?