I recently picked up Wild Goose Chase by Mark Batterson and read through it with a small group from my church.  It's a fantastic, approachable work explaining different ways you can reconnect with your journey to follow after Christ.  The part that stuck with me the most, though, was a single line: "a change of pace plus a change of place equals a change of perspective."

I'm pretty much in a rut.  I work the same hours every weekday, followed by a set list of appointments and obligations in the afternoons.  My Saturdays are spent cleaning house and catching up with work that didn't get finished during the week.  My Sundays are spent at church and refreshing through the rest of the day so I can approach Monday with the same energy as the previous week.  I can actually plot out just about every hour of my life for the next month with a scary level of accuracy.

This is not a good thing.

[caption id="attachment_3404" align="alignright" width="355" caption="The Crew that hiked Yosemite back in 2001 waiting for the hiker bus up to Tuolomne Meadows."] 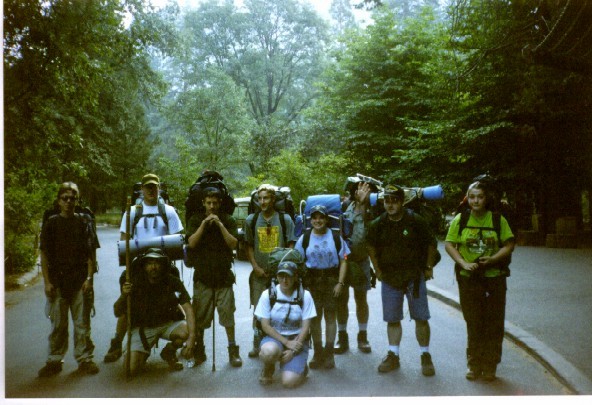 Last week, I changed things up a bit.  It's the 10-year anniversary of a backpacking trip I took with my old Venturing Crew to Yosemite.  We decided to commemorate the anniversary by taking yet another trip down to California.  We hiked a total of 4 days in the backcountry, covering somewhere near 40 miles at about 8000 feet of elevation.  It was sunny, picturesque, and oh-so-exhausting.

It wasn't exactly the same group as 10 years ago, but 4 of the original 11 were able to make it, and we added a couple of new friends as well.  To top that off, we apparently hiked even farther than last time in a shorter time period.  I didn't quite believe that until I looked at the map, but sure enough, we covered more distance. 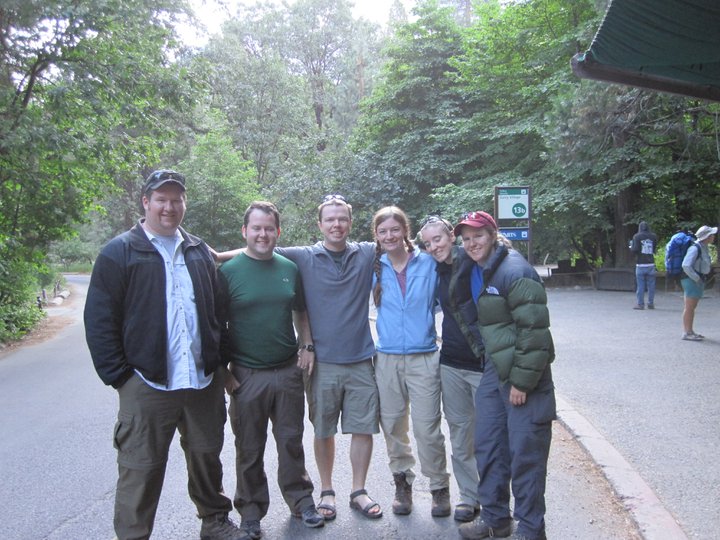 Our first day was pretty intense.  We started in Tuolomne Meadows and hiked up to a random trail junction between the Glen Aulin and May Lake high sierra camps.  A total of more than 10.5 miles for the first day (all after lunch) left us tired, bug-bitten, and some of us severely dehydrated.  It also left us in a very open, unpopulated area with fresh air, cool water, scenic views, and absolute silence.

Our second day was pretty easy, but actually a much longer hike.  We covered 11.1 miles, passing through May Lake, over Tioga Pass Rd, and down into a valley near Snow Creek.  Our campsite was just a few hundred feet away from a ~2700 foot cliff dropping down into the valley.  I can tell you this much, the view of Half Dome from the top of the hill as the sun was setting was absolutely amazing!

The third day was somewhere between 8.7 and 9.2 miles, depending on which map you used or if you looked at the "official" trail distances.  We added a couple more miles to that by taking side trips to see Indian Arch and North Dome before finally camping along Lahemite Creek.  Another great day with spectacular vistas, cool creeks, and a warming campfire before bed.

Finally, we made the long trek down Yosemite Falls back into the valley.  Our shortest day of 6.2 miles took longer than expected (and blew my 4-hour hiking estimate cleanly out of the water).  We took our obligatory "we survived" photo at the bottom of the hill, then made a mad dash for the showers so people would stop giving us dirty looks as we walked by the too-clean tourists.

I got more than a workout from this trip.  I had the opportunity to reconnect with some of my best friends and build even stronger relationships with some spectacular people.  I can say for certain that the trip would not have been worth it without this particular group of people.  But I was also able to step outside myself and appreciate so much that I've taken for granted.

We were hiking in an alpine forest that, for the most part, is yet-untouched by the modern world.  We sat for an hour or two each day to pump water from creeks, bathe, and generally recharge after a long, hot day of hiking.  We carried our own food from start to finish and prepared meals as simple as oatmeal and as intricate as "taco pot" on tiny stoves in the middle of nowhere.  We set our own hours, stopped when we were tired, and took photo breaks whenever we wanted.

Compare this with my regular days back in town.  I wake to an alarm clock, get clean water out of the tap, find a quick and hot meal just down the street, work to another's schedule end expectations, and rarely bother to look at anything long enough to consider taking a picture. 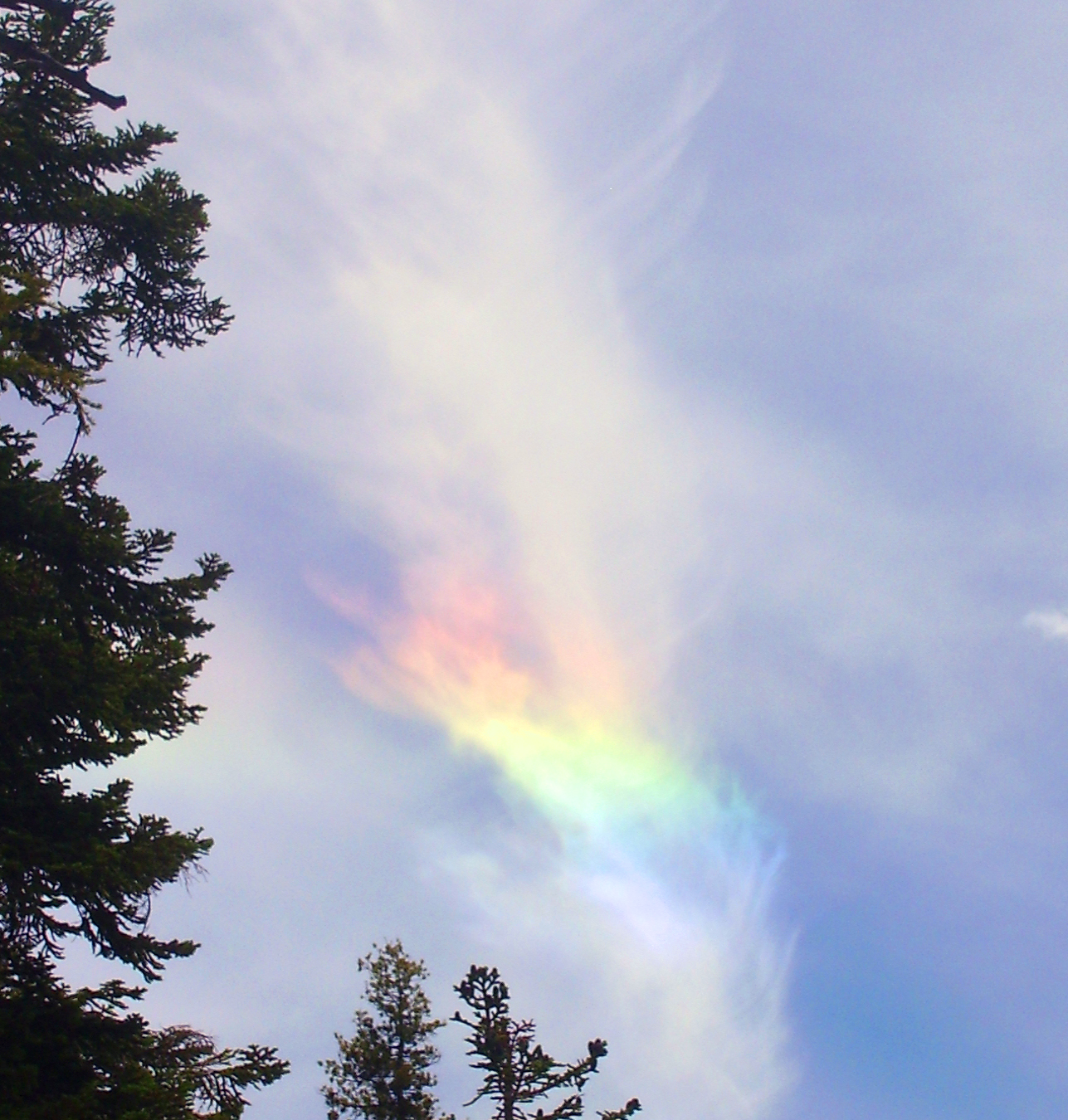 The juxtaposition between Eric the web developer and Eric the backpacker is, frankly, bothering me.  The first day of the trip, I spent most of the time watching the ground (for my footing) and hiking just to reach a destination.  It wasn't until I made myself sick from the overexertion and dehydration that I managed to really slow down and enjoy my surroundings.  Actually, had it not been for C taking so many photos in front of me, I would have missed some truly amazing sights - like the rainbow cloud on the right.

The world around us is beautiful and miraculous.  We miss most of this beauty and mystery, though, because we do so much to shrink the world so it fits into our schedules and expectations.  Who knows how many stunning colored clouds I've missed before this one because I was too busy trying to stick to a different pace in a different place?  Who knows what other beauty has gone unseen?  What other mysteries have remained undiscovered?

Changing my place (Yosemite) and my pace (dropping schedules and expectations) has definitely given me a fresh perspective on the amazing world God has made and given us to enjoy.  Now all that remains is the challenge of not losing this new perspective but instead embracing it and working to keep my eyes open as I continue to follow after Him.