It's rare for someone to completely stump me with a question, but it happens.  I'll take a minute or two to think, then fire back the best answer I can muster.  I may or may not be right, but I always give the best response I can ... even if it's, "I don't know."

A few years ago, though, I was completely dumbfounded by a question.  I went to a career fair at college, hoping to drop my resume in a few promising locations and talk myself up so I could get a job after graduation.  On a whim, I stopped by the table for the Portland Police Department just to see what they had to say.

The presentation was pretty solid.  A good paycheck, working in the community, being able to help people.  It all sounded great.  Particularly when the recruiter told me he was also paid to coach a local basketball game and was allowed to take a trip, on the clock, to Florida when they made it to the championships.  The police have a program that pays officers to be more deeply involved in opportunities like that within the community.  It sounded great, like the stuff all those inspirational sports movies are made of.  But after the presentation, the recruiter asked me a question:

"What are you passionate about?"

I couldn't even dig up an "um."  I just stared at him and blinked, not really understanding the question.  It was something no one had ever asked me before, and I didn't even know how to approach it.

"What do you really care about?  What is it that gets you out of bed in the morning and excited about your day?"

You see, up to that point, all I had really done was get up and go to class.  I had a daily to-do list set by others, and the only thing I cared about was not disappointing those who trusted me to complete it.  Whether or not I cared about the individual tasks on the list was beyond the point.  What was I passionate about?  I'm ashamed to say I'd never taken the time to figure that out.

After college, I tried to get involved in as many places as I could.  I'm active in my church, I volunteer with the Boy Scouts, I attend two separate Bible study groups, and I started volunteering with Habitat for Humanity.  It was there that I finally discovered what pursuing a passion is all about. 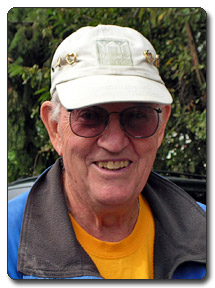 The first Habitat site I ever worked on was called Vance Place.  It was named after Al Vance a volunteer credited with working on "nearly every house" the local Habitat chapter had built over 20 years.  Al was at the build site in person for just about every workday, and it was phenomenal to see him work - at 87 he still worked harder than most of the other volunteers on the build site.

I had the privilege to work side-by-side with Al on two different houses, and it was inspiring both to see him work and hear why.  During a torrential downpour on one workday, I asked him why he was there all the time even despite the weather.

Al Vance passed away May of last year (2010) while still doing what he loved, working on the Habitat community that bears his name.  It's that one-minded pursuit of a life long passion that I find incredibly inspiring and that I wish my life would emulate.