I met a lot of people in college.

There was Frog, the guy who sold hand-illustrated joke books outside the campus bookstore.  There was the leader of the college republicans who sat through most of our Political Science classes bragging about how he'd be on a houseboat rather than writing his term paper.  There was the drama crowd, the geeky math crowd, the coffee-shop squatters who never seemed to go to class. It was an eclectic mix.

Then there was J.  We worked together my sophomore year when I started as an RA[ref]Resident Assistant[/ref] in the residence halls.

He was incredibly smart, even more liberal than me, and infuriatingly vocal about his views on politics and the world in general.  He was the kind of guy who argued against everything and absolutely drove me insane.

At one point, he even started a political discussion forum ... on my computer.  I came back to my room after a long weekend to discover that he'd been chatting with several of my residents though a text file on the hard drive of my computer.

Inventive, I admit, but it really ticked me off at the time.

Let's just get one thing clear: I didn't like J, I didn't understand him, and I thought he was just in my life to give me a hard time.

As the year went on, and our personalities continued to grate against one another (he was my girlfriend's co-RA, so it was impossible for me to avoid him entirely), I forced myself to keep working with him.  I always try to stretch the boundaries of my comfort zone, so I'd sign up to co-chair activities with him for no other reason than to subject myself to his constant devil's advocating.

Before Spring break, he and I were talking about various fair-weather activities and trying to come up with ideas.  I don't know why, but I thought I'd ask him what his plans were for the break.

"Nothing, and I don't want to talk about it." 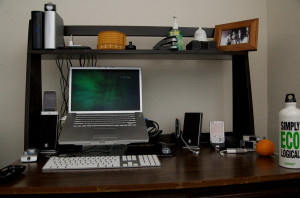 OK, I figured he was being cryptic, so I let it drop for a while.  We kept working and quickly got to the part that required a computer, so we went to his dorm and he fired up one of the nicest laptops I'd ever seen.

"Wow, for a guy who's so against wasting money on consumer goods, you've got a really nice computer."

I wasn't really trying to be insulting, but it was shocking sight.

"I got it from the Make a Wish Foundation," was his dismissive response, and even more of a shock to me.

"I have cystic fibrosis. They gave me the computer so I could use it in college."

Our discussion from that point on turned from all business to intensely personal.  Apparently, J's Spring Break plans were to spend a week in the hospital on IV antibiotics and having fluid pumped from his lungs.  It was a week-long procedure he had to endure once every few months and tried to schedule it so none of his friends would know.

"So ... is this treatable?  I mean, I don't know that much about cystic fibrosis."

I just kind of stood there.  J was one of the smartest people I knew.  One of the most driven.  If anyone had even the hint of a long future in politics (he was a political science major), it was J.  And he just told me his personal expiration date was only a handful of years past college.

"My parents wanted their kids to finish college.  I wanted to give them that.  And with a degree, even though I won't have long to use it, I can still try to make an impression on the world.  There's so much wrong, and I know you agree with me here, that I want to change ... if I can have any chance to do it, this is that chance."

Unfortunately, I fell out of touch with J after that year.  When he graduated, what he did with his degree, and whether or not he's still making an impact on the world is a mystery to me.

The one thing I do know for certain, though, is that he made an impact on me.

To this day, I have never met anyone with that kind of drive.  J had a goal, and he was completely committed to the achievement of that goal.  He knew his days were numbered, and he crammed as much as he could into what days he had left.  It was incredibly humbling to see.

The fact that he didn't go around talking about it is even more inspiring.  Only a few of his peers ever knew he had CF - those of us who had to know, and those of us who he told in private.  He didn't use his disease to collect pity from those around us, and didn't use it as leverage in arguments or raise himself up as a martyr in debates.

There are few people I've met in life who I can truly look up to. J is one of those few. If I have even an ounce of his passion and drive, I am a lucky person.