I find new ways to challenge my faith in the oddest of places.  Lately, though, it was a random political conversation I had with some friends on Twitter.  If you've been living under a rock for the past few weeks, you might have missed the "Occupy Wall Street" movement sweeping across America.  It's something I've only paid attention to in passing, but on the whole many of the "we are the 99%" arguments resonate with me.

We quickly began discussing and debating the point.  Everything from what the Progressive Era represented as an abstract concept, to specific historical evidence and how it tied in to the inevitability of certain tyrannical and corrupt institutions.

@mikeschinkel The Utopian ideal expressed in Progressivism is unachievable and leads to petty tyranny.

Ultimately, our discussion could be summed up into a juxtaposition of two ideas:

For a while, we battled back and forth on ideologies.  We had a few disagreements on terminology, and were somewhat resistant to globalizing the discussion.  It's easy to talk about abstract concepts ("fix an imperfect system" and "reform to remove corruption").  But when you start getting in to concrete examples and practical applications - adding in historical evidence - it becomes somewhat more difficult.

@zamoose You are going too far into ideology. My issue is simply to fix the institutional corruption we have today. /cc @ericmann

We finally narrowed down the root issue: 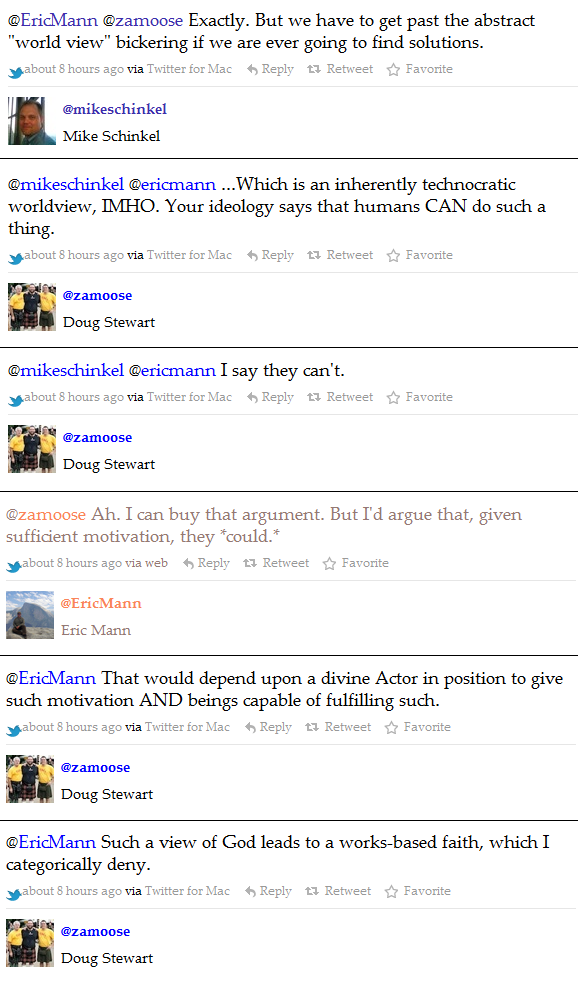 Doug and I agree on many points.  So many in fact, that we end up arguing with one another while trying to make the same point.  But this time, I really had to think ... and it took what started as a theoretical political discussion and dropped it solely in the realm of theology.

I firmly believe that man has fallen from the glory of God because of sin.  I also believe that, through the gift of God's grace through the sacrifice of Christ, that we can be reconciled to God.  I believe we are saved by our acceptance of this gift and our faith in Christ.

Saved by faith ... not saved by works.

At the same time, I think that salvation causes a change in ourselves.  Accepting Christ and committing to living by His example means you're committing to dying to yourself[ref]http://www.boundlessline.org/2010/01/if-youre-single-you-arent-busy.html[/ref] and living for a purpose and motivations beyond self-centered desires.

This leads me to believe that people can change.  That selfish men and women can become unselfish and learn to live by motivations that focus on what's best for others.  That, at least, is one of the foundations of my faith.