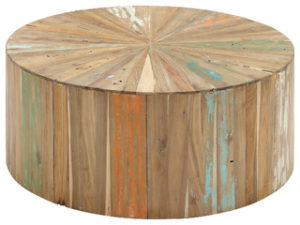 The original reclaimed wood coffee table as pictured on Houzz.[/caption]

About a month ago, we saw an interesting table on a design idea website. It's a round, reclaimed wood table that's sure to bring instant character to any living room. The thing is: I wanted to take a shot at building it myself. Reclaimed wood projects are amazing and they give you the opportunity to take materials used in one project to create a vastly different one - very similar to the kind of refactoring I do with code in my day job.

As it so happens, there are quite a few lumber yards in the area that specialize in selling reclaimed wood. Some even go so far as to build out their own pieces that can then be re-sold, but I just needed a lumber yard with some quality, near-to-dimension pieces that I could use.

Salvage Works in Northeast Portland ended up being the perfect place. 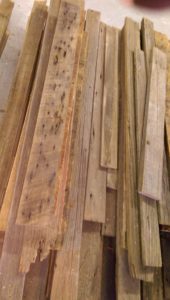 All of the lumber I used was marked as 1x4 but really varied in thickness. Some was in better shape than others.[/caption]

Their indoor lumber yard has a wide variety of reclaimed pieces in just about every dimension you could need. They even have some newer, live-edge pieces if you're looking for that kind of character in your furniture.[ref]I think I already have some ideas for my next project ...[/ref]

I was able to pick up several pieces of lumber billed as 1x4s that had, at one time, been part of a barn from a nearby town that was originally built in the 1800s. Some of the pieces were quite dirty, some had a few very unique weather stains, and some even still had the red paint from the walls! Selecting the pieces was a dirty process, wrought with slivers and a few scratches, but I made off with a great sampling of supplies.

Working with nothing but a photo of what the table should look like was a challenge. It was fun, but still a challenge. Most of the pieces had to be shaved down to the appropriate dimensions; without a planer, I had to improvise a jig for my table saw and just crank the blade up as high as it could go.

I removed most of the nails (some were too deep to extract), and I was beyond impressed with what I found. Remember, the original barn was built in the 1800s ... at the time, you didn't just run down to the hardware store for a box of Loctite nails. Many of the nails I pulled out of these pieces were square, hand-forged nails. 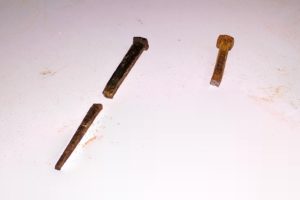 There were several hand-forged, square nails throughout the bigger pieces I got to work with.[/caption]

If that doesn't impress you ... watch the video below to see just what is involved in forging a nail by hand. 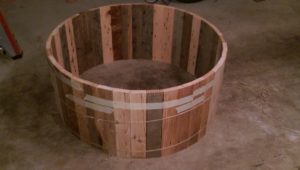 The base of the table is 40 slats, roughly 3-inches in width with a slight bevel.[/caption]

Overall, the project required two major components - the round base, and the pizza-style top. The base itself was easy enough. Each of the 40 slats needed to be cut to size, cut to width, and planed to depth. Once everything was the right size, I cut a 4.5-degree bevel on either side of each slat so they'd all fit together snugly. It took two of us to edge-glue and arrange the entire base, but I then bound it all together with twine and copious amounts of masking tape to dry. 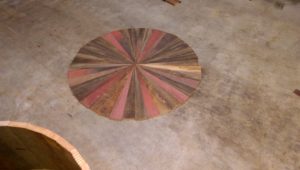 Each "pizza-wedge" has a 3-inch base and tapers to a 9-degree wedge.[/caption]

The top is a bit thinner - each slat is just shy of 1/2-inch thick - than the base. Again, each slat needed to be cut to length, cut to width, and planed to depth. I then built a jig out of some scrap plywood so I could cut each piece into a 9-degree wedge to fit together into the round top. Again, edge-gluing holds it all together, but a thin piece of fiberboard nailed to the underside adds some extra strength to the expanse so it won't accidentally fall into the center.

To fully round things out, I used a nifty trick I learned on YouTube that lets you create a perfectly circular tabletop (or flywheel) with a table saw:

To keep everything locked tight,there's also a length of wire running around the inside and a total of 16 tabletop anchors to keep things from shifting. I applied three coats of varnish to keep everything looking smooth, waterproofed, and cleanable. 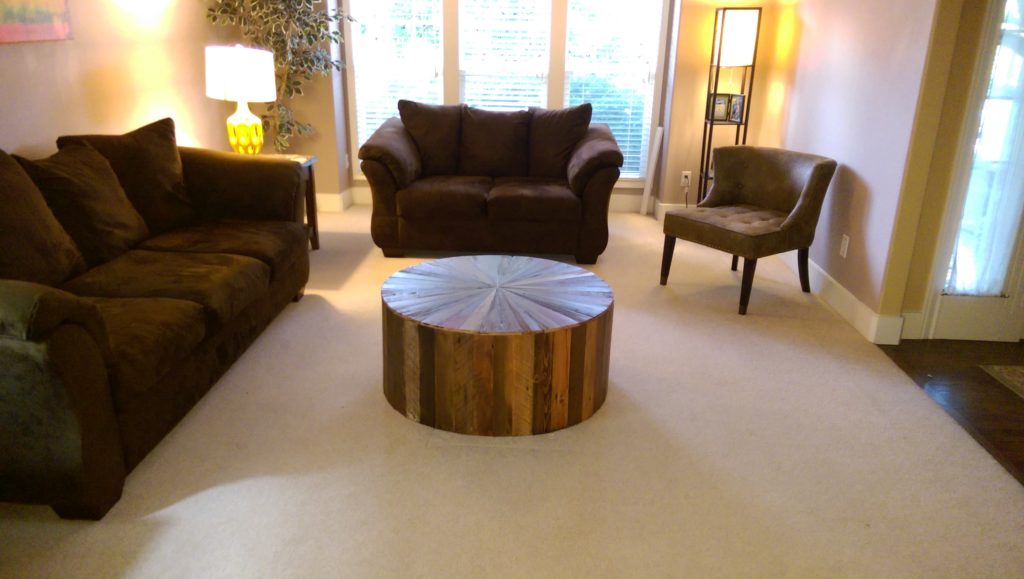 The final piece was every bit as wonderful as I'd hoped. Much of the barn's original red color was salvageable - and looks amazing after a light sanding and varnish. The thick grains in some of the other pieces stand out wonderfully. The age marks in some of the thinner pieces bring out some truly wonderful character as well.

As do the original marks of the band-saws and circular saws that originally hewed the wood almost 200 years ago.

It's truly wonderful what can be wrought when you reuse or recycle materials and give them a second life. I'm going to be happy using and looking at this table for years to come!