I grew up in a union household. As a result, I saw my parents go on strike and lived through the impacts of having a two-income household suddenly reduced to a single income.

It was rough, but we coped.

Once while on strike, my mom managed to sell trimmings from our willow tree to a florist for cash. One time, on the way to my grandmother's house, my dad rode on the outside of the truck (standing on the running board) so he could easily hop off and grab discarded cans for the deposit. I tried to help by collecting newspapers from the neighbors so we could sell them back to the paper company for recycling.

When people fall on hard times, there are a lot of options to find money. If you're willing to work hard.

Sometimes, though, the law - and some corporations' interpretation of that law - fight back.

When we collected bottles and cans, we'd return several hundred at a time. I remember carrying them from the car to the stockroom by the cartload and standing in line while a Safeway employee counted them. Sometimes they moved so fast they'd miss a few cans, and I always argued for the extra few cents.[ref]This was the time a can of generic soda cost $0.25, movie tickets cost $3.00, and a Whopper at Burger King was still $0.99. Every $0.05 can counted![/ref]

A few years later, large retailers (read: Safeway, Walmart, Target, Albertsons, Fred Meyer, etc) started enforcing an interesting provision of the law: their right to refuse to redeem the deposit on more than 144 containers per person per day.

In context, this means no large retailer (over 5,000 square feet of retail space) is required to pay out more than $7.20 per person per day for bottle returns.[ref]This isn't a new provision. But it was renumbered in 1991, bringing it back into the minds of retailers. Before then, it was never widely enforced.[/ref] The newer machines we have even kick out a receipt at that threshold and remind you of the limit.

If you've ever returned a large number of beverage containers, you would likely agree it's not an enjoyable experience. Containers are sticky, the return machines break down frequently, some containers aren't even accepted. It's been years since I've ever come close to the 144 container limit.

But I've seen other people hit the limit, and it hasn't been pretty. Safeway, the very store I used to return containers to, has an incredibly irritating sign posted right next to the bottle return area. 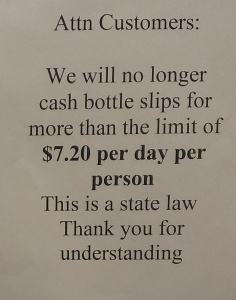 Last night, I witnessed first-hand how the management handles this situation. A woman and her daughter were returning cans and bottles and ran across the limit. When they did so, the machine kicked out a receipt, but they kept adding their containers. An employee noticed, and ran across the store to get his manager.

"They're going to try to cash more than the limit. Keep an eye on them."

A minute or so later, the woman and her daughter walked to the customer service desk and asked to redeem their bottle slips.

"I'm sorry, but we aren't allowed to redeem more than 144 containers per person per day. You tried to redeem 150, and that's against the law."

Are you kidding me?

They eventually agreed to accept only $7.20 (the first 144 containers) and held on to the additional slip for $0.30, with the manager's permission to come back "tomorrow, no earlier, because the law is per day."

Where the Frustration Lies

I'm frustrated by how a law can allow a retailer to refuse to do something, and said retailer will instead cite that permission as a restriction on their ability to go above and beyond.

I'm frustrated by the attitude of people who apologize for allegedly following the law. If you need to apologize for obeying a rule, chances are good it shouldn't be a rule in the first place.

I'm frustrated by the attitude of employees who treat certain customers like criminals for trying to return a few extra bottles. First off, the machines still accept more than 144 containers. The machines still print return slips for more than 144 containers. But despite having already accepted the containers in the first place, managers feel in the right to refuse monetary payout - even if it's as little as thirty cents.

I've seen homeless men and women downtown turned away from grocery stores because they've reached their $7.20 limit. I've seen parents trying to use cash from bottle returns to supplement what money they have for paying for their children's food. I've seen managers yell at, dehumanize, and otherwise humiliate people for returning more than their allotment of containers.

Laws exist to protect the general welfare of the people, not to enable unjust discrimination based on race, sex, religion, or socio-economic status. Seeing laws in the books that protect the interest of corporations over individuals irritates me to no end.