I'm taking a break from my series on the RingCentral Game Changers tutorial pieces to explain how these automation systems can work in the wild.

All of these are the kinds of questions I think through when I'm bored and have access to a reliable WiFi connection - looking up property values and calculating commute times is relatively easy. Finding something I actually want is relatively difficult. Yesterday, though, I thought I'd found what I was looking for - a vacant plot of land in a good community near good schools just a 13 minute bike ride from the office. I immediately filled out the "tell me more" contact box on the listing and figured I'd work on some more tutorial pieces for the rest of the day.

An "agent" named Alex texted me a few minutes later and offered to talk if I was free. 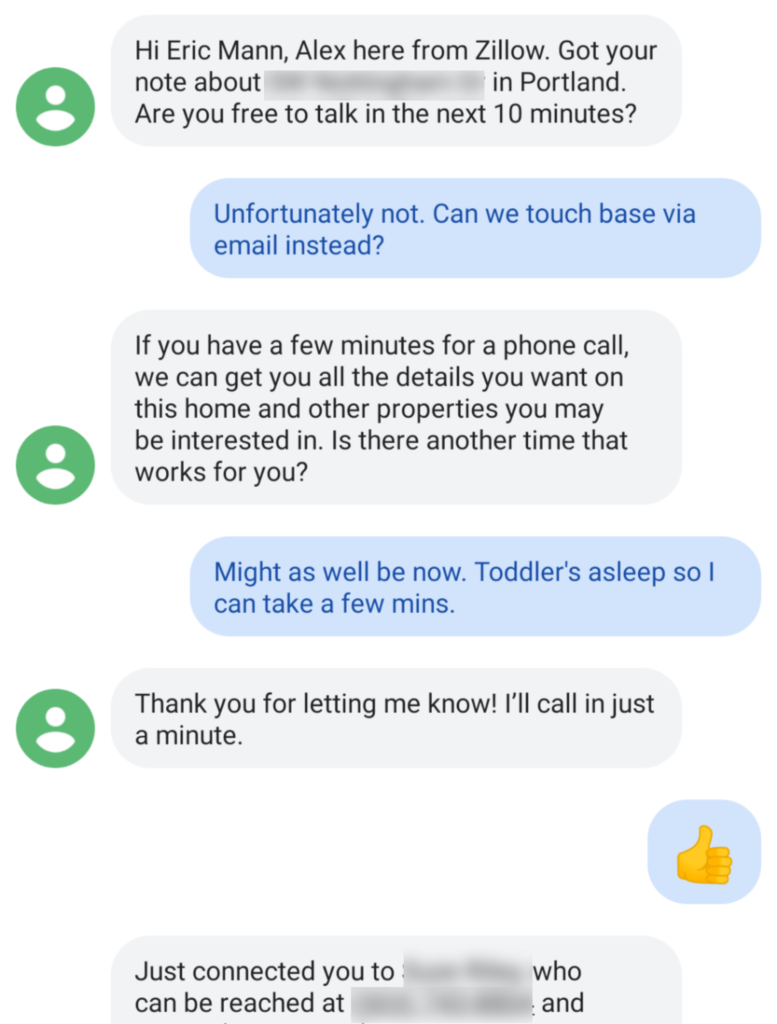 My brief conversation with what I thought was a real person working at Zillow.[/caption]

The "agent" seemed friendly enough, and he called me a few minutes later. But now, the reason for why I put "agent" in quotes.

It turns out, the text conversation I had was with a machine. There was no human on the other side, just a virtual assistant programmed to talk me into getting on the phone. Once I agreed, the "agent" reached out to a local agent in the area and told them I was interested in this property. When she agreed to talk to me, the "agent" called me immediately.

When I answered the phone, I was met not with a human voice, but with a machine-generated bot similar to the old school "please leave a message after the tone" robo-receptionists I'd seen all the time in college. It instructed me to "press 1" to be connected to an agent. Then "Alex" picked up and only said "I'm connecting you with your local agent now" and the phone started ringing again.

I eventually did speak to a human being - a local agent in Portland - but the entire system before I was connected to an agent who could help answer my questions was entirely automated. Automated text messaging. Automated call routing. Automated answering. This in-the-wild illustration just shows how powerful a fully automated and AI-powered system can really be. Through this system, Zillow can virtually represent hundreds of agents and connect potential home buyers to them directly. All without hiring a call center of their own.