I'm in the midst of developing a real-time publishing system, and I wanted to give an example of what it is and why I want to do it.

Today, Apple is promoting a live press event, and Gizmodo is live blogging their coverage on http://live.gizmodo.com/.  It's a really basic page, but it updates automatically as new changes are available.  Their update engine is also pretty basic, but illustrates exactly what I want to do ... just in a very inefficient fashion. 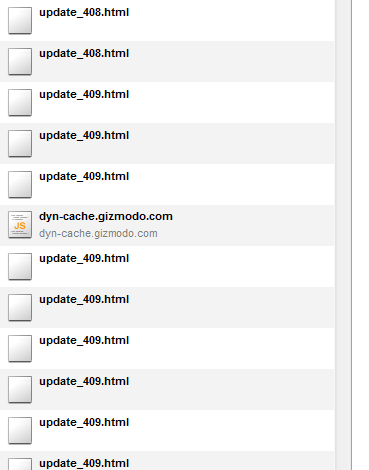 If the file doesn't exist, the script waits for 10 seconds and tries again.

This is an example of AJAX polling - The page uses AJAX to check with the server every now and then and ask if anything's changed. It's a simple way to retrieve data, but is ineffective in many regards.

For one, the browser is firing a new HTTP GET request once every 10 seconds, whether the server has changed or not. This leads to a lot of 404 Not Found errors if the update hasn't happened. It's very much like a kid in the back seat asking "are we there yet" every mile hoping you've finally made it to McDonalds.

It works, but it's not the best way to do things.

The system I'm currently working on will use server-triggered events to update data instead. Think of it like the too-mature kid sitting in the back reading a book and waiting until you've stopped the car and are ready to order your Big Mac. Not only is the kid less annoying, but you have fewer distractions to worry about while you're driving.

The problem with polling

The alternative is to leave the updating entirely to the server. When new content's ready, it tells the browsers directly. If no content has changed, no extra HTTP messages travel across the wire. Now the server is able to work on other tasks and can serve regular traffic without a chorus of impatient browsers asking if anything's changed.

The entire city full of kids waits for you to tell them that you're there. Not a single "are we there yet" in earshot to interrupt the pleasant music coming across the radio.

Tell me, which over-crowded car would you want to drive? I bet your server feels the same way.