Over the past several weeks, the term "net neutrality" has been in the news often. It's an age-old debate over whether or not Internet service providers (ISPs) have the right to control  end users' access to content.

It's a dick move on the part of ISPs. According to some, the net neutrality debate has become more than just a war of words - they allege they've seen it.

On the one hand, an ISP controlling the speed at which customers access streaming entertainment feels like something well within their rights. But what if the media being streamed isn't entertainment. An ISP limiting media bandwidth could mean limited access to Game of Thrones, but it evolves quickly to limited access to video lectures and other educational content.

In 2011, the United Nations recognized the impact of intentionally limiting network access/communication and declared it a violation of the International Covenant on Civil and Political Rights:

While blocking and filtering measures deny users access to specific content on the Internet, States have also taken measures to cut off access to the Internet entirely. The Special Rapporteur considers cutting off users from Internet access, regardless of the justification provided, including on the grounds of violating intellectual property rights law, to be disproportionate and thus a violation of article 19, paragraph 3, of the International Covenant on Civil and Political Rights.

This report goes further than just state-mediated cutoffs of access and condemns any form of intervention in access. In the context of the UN, this applies specifically to states interfering in the people's right to protest and communicate about that protest with the outside world.

On the other hand, if the ability to communicate over the Internet is a right protected by international convention, then ISPs attempts to limit that communication means these same ISPs are essentially violating international law[ref]The United States signed the covenant in 1977 and ratified it in 1992. This is not a new international agreement at all.[/ref] (emphasis added):

1. Everyone shall have the right to hold opinions without interference.

2. Everyone shall have the right to freedom of expression; this right shall include freedom to seek, receive and impart information and ideas of all kinds, regardless of frontiers, either orally, in writing or in print, in the form of art, or through any other media of his choice.

3. The exercise of the rights provided for in paragraph 2 of this article carries with it special duties and responsibilities. It may therefore be subject to certain restrictions, but these shall only be such as are provided by law and are necessary:

(a) For respect of the rights or reputations of others;

(b) For the protection of national security or of public order (ordre public), or of public health or morals.

I've personally seen organizations like hotels charge for high-speed access to specific sites (like Netflix, Redbox, and Amazon.com). I've also seen behind the curtain at an ISP where the network speed allowed a customer is determined by the flip of a switch and has zero impact on the overall network's capabilities.[ref]When I first moved in, I asked to be set to my ISP's highest network speed, which is 35/15. Not insanely fast, but speedy enough for most of my purposes. When the technician tested my network, I was getting 50/50 instead. Apparently the previous residents had been grandfathered into a higher-speed package my ISP no longer offered. He apologized as he watched a network administrator "correct the mistake" by typing a command.[/ref]

Then there are those making more specific accusations that specific ISPs are throttling at specific times of day:

The battle between Verizon and Netflix is well-documented, and currently under investigation by the FCC. Both firms claim the other is intentionally slowing traffic to force an issue. Either way, the issue is hurting customers, not the firms involved.

The Verizon-Netflix conflict is a real one. But are other ISPs also throttling their network? Has the net neutrality debate moved beyond a war of words and begun impacting customers (you and me) already?

I've never been a fan of basing accusations of corruption on untestable anecdotes. Yes, we think we've seen network throttling in practice. The evidence to support those allegations, however, is incredibly thin.

I'm a software developer and, in a former life, a scientist. I want to automate the process for gathering reliable, reproducible data about network speeds. Late last week, I wrote a simple script that will test the speed of the local network every 10 minutes and log the results to a file. 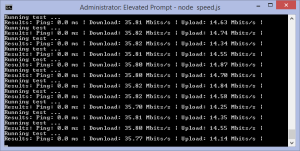 When you leave the script running, it reports back the results of every test.[/caption]

If enough people run the script against enough ISPs, I can pull together a concrete report on:

Let's work together to build a body of tests that can put this debate to rest. It could be the evidence we need to prove wrongdoing on the part of large ISPs. It could show where more evidence is needed. It could show that nothing is amiss and we've all been given to some sort of conspiracy story. We won't know for sure until after we run our test.

If you want to be involved, I ask you do the following:

The script will create a [cci]log.csv[/cci] file in the same directory and log the results of speed tests every 10 minutes. After a few days,[ref]The longer you run the script, the more complete picture we gather. All I ask is for 2-3 days of data, but if you can run things for a full week that gives us a clearer picture of what's happening.[/ref] email the CSV file, along with details explaining your location, your ISP, and the network speed you're supposed to be seeing to eric+speedtest@eamann.com. I'll collate the results of multiple tests and post the information on this site when it's ready.

Let's work together to see what's really going on.