A few months ago, WordPress UX Lead Jane Wells posted a request to WordPress' Trac ticketing system.  The idea was to find a better way to insert "stuff" below WordPress posts:

Inserting the sharing and like rows at the bottom of the post text before the byline/classification metadata seems wrong. It should go below that, so it is closely related to commenting, not part of the content itself. The plugin-generated widget is not "by" the post author, after all.

I haven't used very many social media plugins for exactly this reason.  Nor have I ever used a "related posts" plugin.  They always seem to conflict with one another and build up a bunch of unnecessary cruft below my content.

So for the past few months, I've been thinking about different ways to handle this. 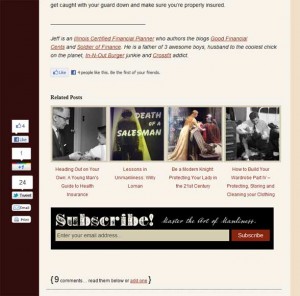 The Art of Manliness adds an author box, a Facebook "like" button, a related content gallery, and a subscription feature to the bottom of each post.[/caption]

My first idea was to just use a template region within a WordPress theme.

Each individual theme would call some variety of [cci]get_template_part()[/cci] to set up whatever region is being used.

The problem with this, though, is one of standards.  What template regions will be supported?  How will new ones be developed?  After the battle over post formats, this isn't a particular standard I want to battle.

Individual plugins would then register these intents and their various actions, but leave it to the theme to style the presentation.

I was entirely sold on this idea.  Well, until a long Twitter conversation with Helen Hou-Sandi:

@EricMann Thinking in CMS-land, I could see using that template tag for a lead form, or a gallery, or something not sharing.

When you take things like photo galleries, related posts, and actions other than social media integration into account, the concept of post intents no longer makes sense. 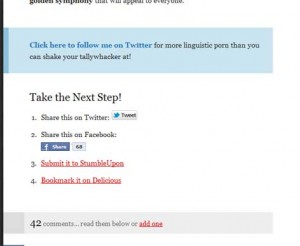 I love having a large number of action hooks to use when I'm building a theme.  I can move content around, add custom views to my content, manipulate the display.  The sky's the limit.

So when several developers suggested that we just add a few action hooks before and after the post content, I was intrigued.

But really, this is what themes are already doing.  And merely adding a few extra action hooks just gives plugin authors the ability to inject their own markup into the flow of your otherwise well-built design.

Considering some of these add-junk-to-the-bottom-of-my-content plugins already break the display, why would they function any different if I gave them a specific hook to tie in to?

Instead, I have in mind a hybrid of a new action hook and registering a new object: post supplements.

Think about widgets for a second.  There's a specific area to display widgets (the sidebar), each widget is registered with WordPress and placed in this area, and a well-coded widget leaves much of its markup to the theme ([cci]before_widget[/cci] and [cci]after_widget[/cci]).

So think of two things:

Then, just like with widgets, these supplements can be added to the theme.

I don't envision a UI for this feature.  Everything can be handled programatically - supplements appear on screen in the order in which they were added to the system.  Likewise, they can be unregistered the same way.

This keeps the WP interface lean and mean, but still gives us a more efficient way to add content to a post in exactly the place the theme designer intends: [cci]do_action( 'post_supplements' )[/cci] or [cci]wp_post_supplements()[/cci].

This would be non-trivial to build, so before I dig in to the code I want to solicit feedback on the idea.

Does this make sense from a usability standpoint?