Back in September, I saw a random post on Twitter from the team at System76 about a "superfan contest." The goal was to build something awesome using open source tools and tell the world about it. The announcement video was pretty inspiring, too.

Superfan is taking off! Now until October 4th, we're looking to recruit 10 loyal fans to join us for Superfan 3: Mission to Thelio. Visit https://t.co/OuIt1hjbBt to see how YOU can be part of the mission! #superfan3contest pic.twitter.com/xlDZ9XE96L

Given I have little time available these days for side projects, I was on the fence about entering. A couple of weeks in, though, someone encouraged me to enter the unboxing review post I'd done about my new Oryx Pro this time last year. My Oryx is my primary machine, and it's a beast. I use it for everything from watching YouTube after I get home from work to writing my security column for php[architect] to coding up side projects like the Ecological Society of America.

Beyond that, I also use my Oryx and its powerful GPU to crunch numbers for machine learning competitions on Kaggle or quick modeling PoCs to demonstrate various approaches and algorithms to friends and co-workers. It'd be fair to say I love this machine and every thing about it, so I was thrilled to throw my summary post into the ring.

In case anyone's still on the fence about @system76, I did write a review of my Oryx Pro last July => https://t.co/HcenS2EEgB

Have used it at events in multiple countries for multiple projects. Love it every single day. Can't go wrong with System76 or Pop_OS! #superfan3contest

I never expected to actually win.

After the shock of actually winning something wore off, I worked with my family to make sure I could actually make the trip out to Denver. I took a day off from work for travel and jetted off on my way to the mile high city. It was surreal. This is literally the first trip I've ever taken solo that wasn't directly related to my job but instead to a hobby.

From Portland it was a quick trip, so I had plenty of time to still catch up on work en route. The Superfan event itself was scheduled for all day Saturday, so I took time to settle in at a higher altitude, call home to check in, and mentally prepare for ... I had no idea.

Saturday morning, I loaded onto a bus with the other Superfan winners, a handful of press, and a couple of representatives from System76. They took us to the company headquarters where we split into teams of "recruits" and engaged on an immersive experience in the warehouse.

By "immersive experience" I mean we were all space recruits asked to complete various challenges on a mission to Thelio to rescue some advanced technology from the hands of alien invaders. We had to pilot remote control cars through a black-lit obstacle course. We had to land drone aircraft on "asteroids" to mine for resources to help us on our journey. We had to search through an AR bed of sand to search for hidden messages. Then we had to regroup and assemble all of our collected information and materials to uncover the location of the Thelio system!

After cracking the secret message, we ran armed with nerf guns and eradicated the alien menace plaguing Thelio. For our efforts, we were all rewarded ... each with a Thelio of our own! 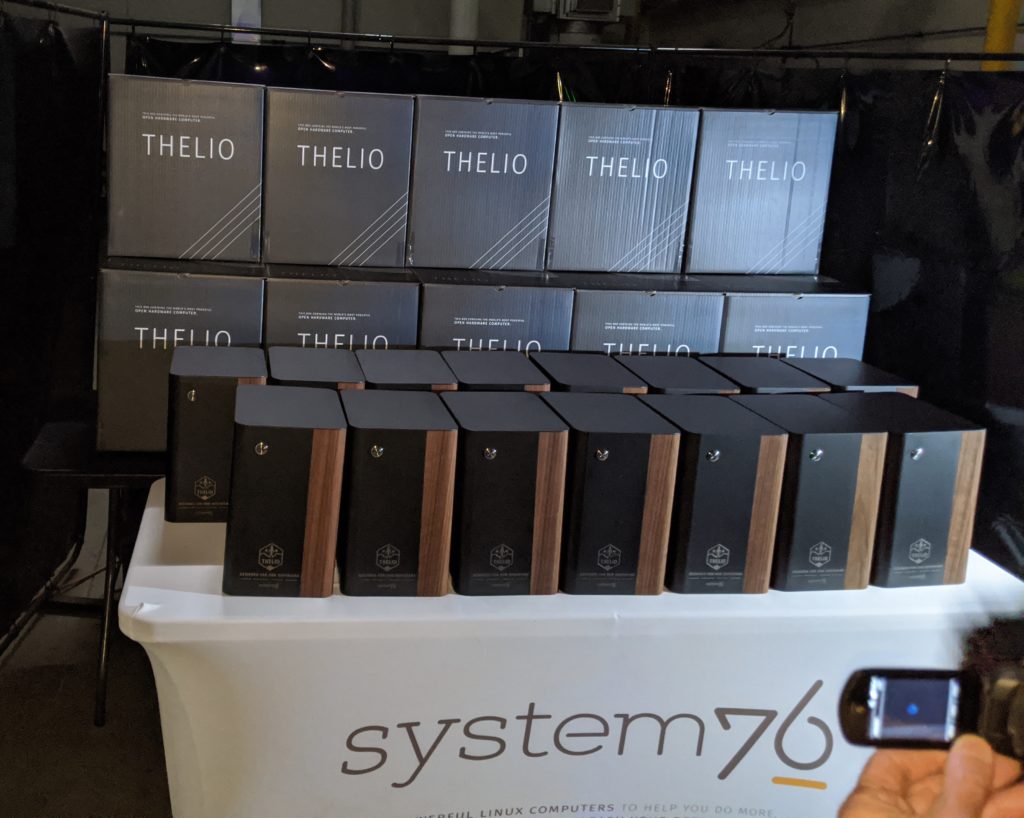 The immersive experience was only the first part of the Superfan event. After we finished with the space games, we took a long, guided tour of the warehouse and production facility. It was eye-opening.

My master's degree is in international business; as part of my graduate program we took a three week tour of Southeast Asia visiting manufacturing facilities in various industries. I've been through dozens of factory tours, but System76's smaller warehouse is one of the more impressive. It only features a handful of what would be considered heavy machinery as, frankly, the heavy lifting for building a computer is the final assembly and testing. Still, every element of the tour spoke volumes to the sheer volume of detail the team considers with every component they use.

From the powder-coated interior of the desktop tower to the hand-rolled natural wood veneer, the team takes care every step of the way to build machines that are not just powerful, but actually demonstrably fun to use. Even the vent covering the fan on the machines is detailed - the Thelio is somewhat space-themed and the vent features planetary bodies orbiting the sun. But the planets aren't organized arbitrarily - they're positioned in the vent the same way they were on the date of the Unix epoch.

Some of my favorite stories about Steve Jobs are of the lengths he would go to ensure the perfection of his product vision. Most of the anecdotes might prove to be fictional or embellished, but at least one is rooted in fact. While developing the NeXT computer, Jobs and his team ensured even the interior of the machine was smoothed and painted:

A manic attention to detail went even as far as the inside of the NeXT computer. Not only did all of the screws feature expensive plating, the inside of the magnesium case was a fancy matte black, even though almost no one would ever see it. - Remembering The Design Legacy Of Steve Jobs’s Other Great Computer Company

It's this level of detail that shows who the NeXT was designed to attract. The machine itself was (at the time) a graphics powerhouse and empowered designers, programmers, and makers - the people we think of who are the most focused on the quality of their products - to revolutionize the industry. It was an expensive machine and helped an entire industry soar to new heights. 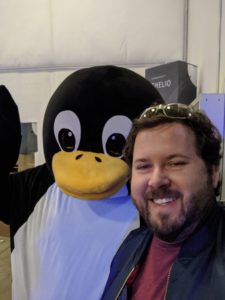 Tux the penguin even made an appearance![/caption]

The Superfan event took all day, and only the morning was filled with games. After a break for lunch, we spent the rest of the afternoon discussing both existing hardware and software designs with the team as well as their plans for the future. What I'd expected to be an hour-long roundtable discussion with the CEO and engineering team turned into a half-day dream session where we discussed and debated our (somewhat lengthy) wish lists for the perfect machine.

A laptop with a 95 Wh battery. Internal USB ports for swappable HSM/TPM support. Aluminum vs carbon-fiber frames. Software workarounds for leveraging user-defined runtime switching between GPUs for spawned processes. It was a lengthy geek-out session, and I don't think even a second of that time was wasted. We were meeting with the folks who design and build the tools we use to do our jobs, and they care just as much about the quality of those tools as we do.

Spending the day with the team was a moving experience. Followed by pizza. And an epic nerf gun fight in the warehouse. It was quite a day.

Now I'm back from Denver, and I have my new Thelio proudly displayed in its new home - my office. It's an absolutely gorgeous machine with an equally powerful and passionately developed operating system running it.

My new Thelio, right where it belongs[/caption]

I'm looking forward to the amazing things I can do with this machine. I wonder both where it will take me in my work and my career, and where the lessons this machine has taught the System76 team will take them in the years to come.

I have it on good authority they'll start by working on a new laptop in 2020.

The past year introduced me to pop_OS and I will be happily sticking with that OS over Windows, Mac, or any other Linux distribution for the foreseeable future. The past month introduced me to the magic that is a computer built for makers by makers who are equally as passionate in their craft as I am mine. After my experience with the System76 team, I'm fairly confident I won't need to ever consider another hardware vendor again.