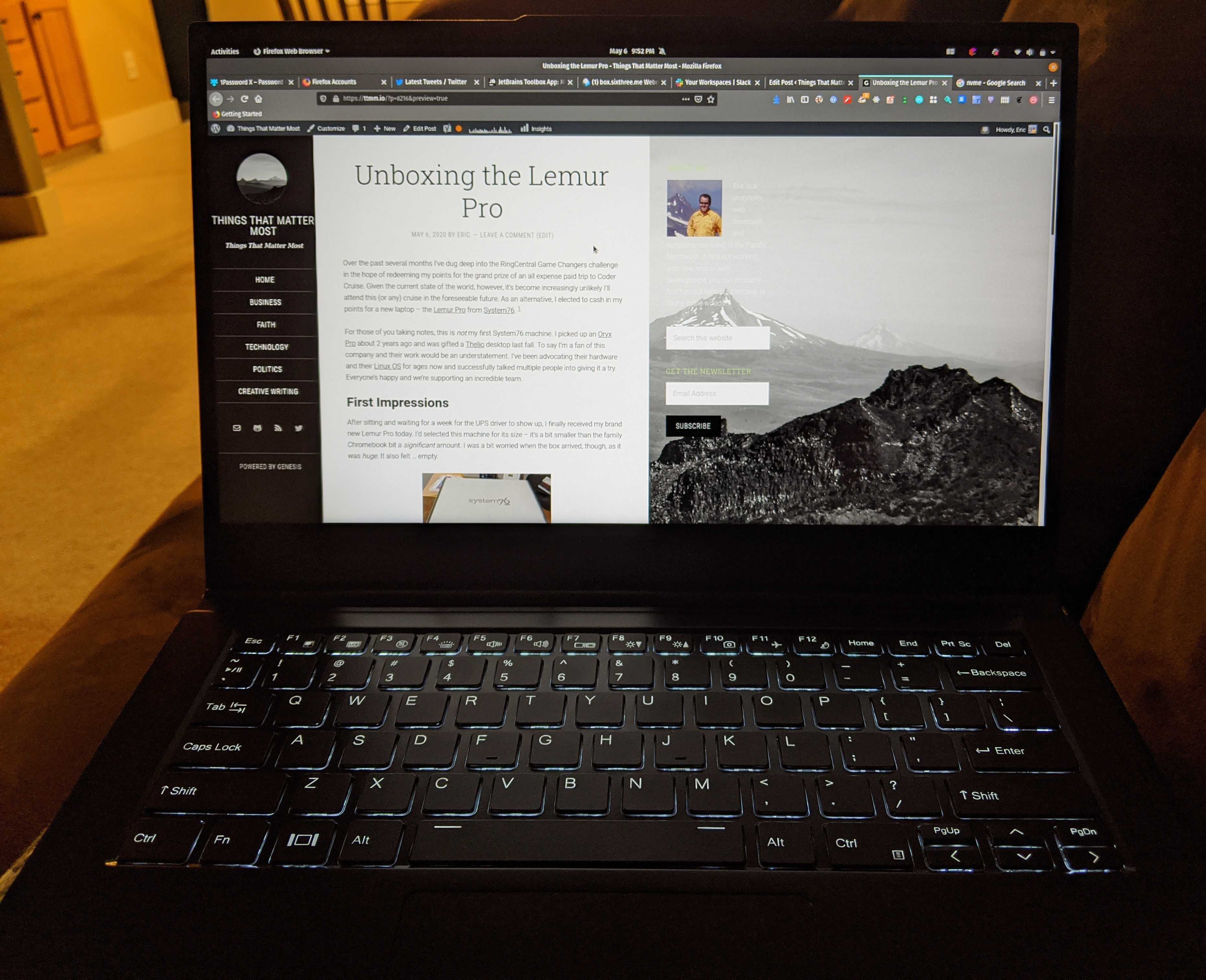 Over the past several months I’ve dug deep into the RingCentral Game Changers challenge in the hope of redeeming my points for the grand prize of an all expense paid trip to Coder Cruise. Given the current state of the world, however, it’s become increasingly unlikely I’ll attend this (or any) cruise in the foreseeable future. As an alternative, I elected to cash in my points for a new laptop - the Lemur Pro from System76. 1

For those of you taking notes, this is not my first System76 machine. I picked up an Oryx Pro about 2 years ago and was gifted a Thelio desktop last fall. To say I’m a fan of this company and their work would be an understatement. I’ve been advocating their hardware and their Linux OS for ages now and successfully talked multiple people into giving it a try. Everyone’s happy and we’re supporting an incredible team.

After sitting and waiting for a week for the UPS driver to show up, I finally received my brand new Lemur Pro today. I’d selected this machine for its size - it’s a bit smaller than the family Chromebook bit a significant amount. I was a bit worried when the box arrived, though, as it was huge. It also felt … empty.

Once I got things open, I was greeted by the usual stellar branding I’m familiar with from System76 products. I also realized immediately why the box was so light. The Lemur is remarkably small!

As much as I wanted to dive right in, I had a tiny bit of work to do. I have family who works at Intel, and they’d managed to order me a couple of fairly sizable NVMe SSDs a few months ago. Originally I had planned to add one to my Thelio, but have since switched to standard SATA SSDs in the available drive bays. I decided to hold onto one for my Oryx (I’ve just been too lazy to add it) and hold the other as a spare.

Since I had a pristine machine on my hands and no user files to migrate, this was a perfect opportunity to upgrade the drive without any potential headaches!

The System76 team is dedicated to being as open and transparent about their tech as possible, so they’ve published full maintenance and repair guides for the Lemur online. I used the guides to navigate the internals of my machine and swap out the drive with ease.

Next I booted things up with a live USB drive for Pop_OS and installed the operating system anew. After a few more minutes of work I had everything configured and ready to go. I even connected my machines on the local network so I could share background images and user avatars!

I’ve only used this machine for a few hours today, mostly between configuration and writing this blog post. That said, I’m already a fan! It’s light, portable, the battery seems solid. I have one minor gripe with the trackpad,2 but the machine itself is definitely worth the price. If you have any interest in an ultraportable yet powerful Linux machine, I’d encourage you to pick one up yourself.

For anyone who missed my earlier posts, the Game Changers program is a way for anyone who writes code to get experience with RingCentral and the APIs they publish. You can leverage their platform for voice, SMS, video, and even app-based communication. The Game Changers program itself empowers developers to experiment with the system, write tutorials, and give back to the community.

It’s a great way to learn how to use the systems produced by an outstanding team from a super relevant telecommunications company. Not only that, but completing challenges earns you points you can exchange for awesome swag. Want a bust of Captain Picard facepalming? 10,000 points. Want a one-year subscription to Nomad PHP? 15,000 points. Want an awesome new Lemur Pro? 75,000 points.

If you want to get started, merely sign up at gamechanging.dev and dive in. It’s a blast!3